This project is now in update mode. Check back regularly to see how things are progressing.

Love Boat: A play by Syrian Writer and Director Nawar Bulbul staring some of the most amazing people I have ever met!

Hello friends!!! So we now have just one week left and the campaign seems to be stuck at 72%. now I am sure that with some creative budgeting and dispensing with a few less necessary things like research software this money will allow me to complete my research without having to put very much on credit. But I would like to issue a new challenge. As some of you may know I have been attending rehearsals for a play written and directed by Syrian theatre artist and TV star, Nawar Bulbul who was responsible for Shakespeare in Zaatari and one of the reasons I chose to focus my research here. His new play, Love Boat, is about the journey of a Syrian theatre troupe who has reunited after fleeing Syria and decided to attempt the treacherous journey across the Aegean Sea by by boat. Along the way they imagine themselves performing theatre in each country they will cross on their way to Germany. In Greece they will perform Aristophanes, In Italy they will perform Commedia dell'arte, in France they will perform Moliere, and so on...In between each mini-play we hear a story from each one of the troupe members about their life in Syria during the war. These stories are the actual stories of the refugees acting in the play. Only, instead of being told through a tragic lens, Nawar prefers to have them play these stories comically, which brilliantly allows each person to control the memory of their narrative and resist the attempted damage by violent groups in Syria. This play is so important to the lives of the people performing it AND to those of us who need to see the Syrians affected by this war as humans who have an enormous capacity to survive and love rather than as faceless victims. But in order to make this play come to life Love Boat needs some money. Sets and costumes do not pay for themselves. Therefore, If this campaign can reach $10,000 I will give $500 to the production of this play. If this campaign reaches $11,000 I will give $1000. If this campaign goes beyond $11,000 I give $1000 plus every dollar beyond that.... So go out and spread the word. Let's push this campaign past its 100% goal!!!

I am a PhD candidate in Performance as Public Practice, a scholarly program focused on the intersection of performance and citizenship in UT’s Department of Theatre and Dance. I am also a veteran. As a soldier, I developed collaborative theatre programs in Yemen and Pakistan aimed at strengthening the collective political voice of marginalized peoples. Our work served as a laboratory where peaceful and more equitable relations could be imagined and rehearsed. Today, nowhere is this work more needed than in the Syrian refugee camps.

I am researching how refugees in Zaatari Refugee Camp use performance to reimagine citizenship and community in such a way that supports the refugees’ capacities to negotiate their political rights and enact self-determination.

Today there are approximately 80,000 Syrians living in Zaatari Refugee Camp,  a 1.3- square mile tract in northern Jordan first opened in July 2012. Many of the residents have lived there for two or more years.  In that time portable housing units have replaced tent dwellings and a market street, filled with vendors has taken root. Now, the United Nations, global non-profit organizations, and corporations are discussing ways to develop this small area into a full fledged city with a sustainable economy. Even in this scenario, Zaatari's inhabitants are unlikely to be granted Jordanian citizenship. Because of their refugee status they are not recognized as citizens of Syria either. They live in a legal limbo with no political rights and little protection for their human rights.

Theatre as a practice is particularly suited to populations where political rights have been lost or systemically denied. Theatre brings communities together and helps them define who they are and how they relate to one another. Across world cultures, theatre, dance, music, and other forms of performance have opened a shared space where dislocated people unfamiliar to each other may explore commonality. Over the last century especially, a number of theatre artists have developed codified practices to promote the rights of marginalized peoples and rehearse new possibilities. The lists includes among others:

In refugee camps, where itinerate populations make community formation difficult, performance as a means of collective and individual empowerment assumes an even greater importance. 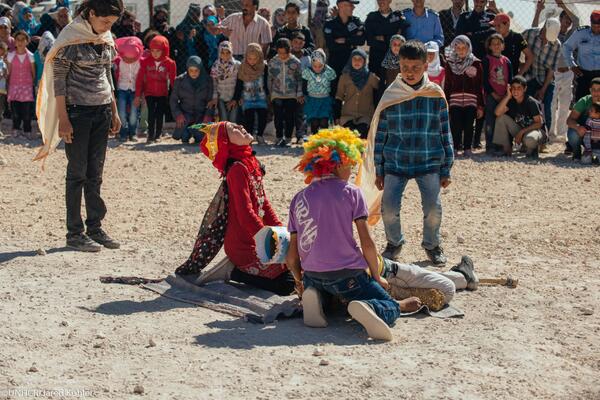 Theatre, dance, music, and other forms of performance open a shared space where dislocated people unfamiliar to each other may explore commonality and communal belonging. Ultimately these moments of collective creativity and struggle forge new bonds between both the participants and the audience, opening the possibility for an organic citizenship to arise.

At any given time there are over a half-dozen performance projects in rehearsal or play in Zaatari. A few follow well known theatre for social change practices. Most, however, follow a more didactic method by teaching refugees how to be Western citizens, rather than allowing forms of citizenship to naturally evolve. My project proposes a ground up approach that empowers the people in Zaatari to explore what citizenship means to them. To develop both a theory and method for this practice, I must first study how theatre has fit into the international framework governing the refugee camps. Field research requires observing, recording and analyzing the performances that are currently occurring in Zaatari. In the event I am invited into a program because of my background, I will also function as a participant-observer. Additionally, any money that is not needed for direct research expenses will be used to help fund individual projects occurring in the camp.

How You Can Help?

This research project requires that I travel to Jordan to view the entire performance processes in Zaatari and witness the interactions between participants and spectators. On January 21, 2016, I will leave the U.S. and travel to Amman, Jordan. Through my scholarly and diplomatic contacts, I have secured housing in the region and begun establishing ties to local performance efforts on the ground.

All donations are tax deductible and available to employee matching programs in companies that support university contributions. For details take a look here: http://www.matchinggifts.com/utexas/

In the sidebar, you will notice specific giving levels have been listed for your convenience. Every donation will have a direct impact on this research. For example, a donation of $100 provides housing for one week. $50 could help me pay for props for actors. Additionally, your contribution will earn you access and updates into my fieldwork equal to your giving level. Everyone who donates will be included on a monthly update email, those who donate at the $100 level will receive access to a private Facebook page where I will post weekly updates and photos from my research.

What is the Impact?

The impact of this research for marginalized refugee populations will be experienced on three levels:

Our way
of Thanking You

All previous perks PLUS...you will receive access to an exclusive Facebook page that will chronicle my research and dissertation writing process.

All previous perks PLUS...Your name will be included in the acknowledgements section of my dissertation.

All previous perks PLUS...You will receive a personal postcard from the field featuring an image from my research.

All previous perks PLUS...You will receive a .pdf of my dissertation following its successful defense.

All previous perks PLUS...You will receive a bound copy of my dissertation with a personal handwritten note of thanks from me.